In developments that surprised absolutely nobody, Elon Musk got a little mischievous on Twitter yesterday, affirming that he “won’t sell” his Dogecoin.

The comments came on a thread with – you guessed it – Bitcoin diehard Michael Saylor, CEO of software-cum-bitcoin-holding company MicroStrategy. In further developments that, again, surprised absolutely nobody, Dogecoin jumped 10% off the back of the endorsement. 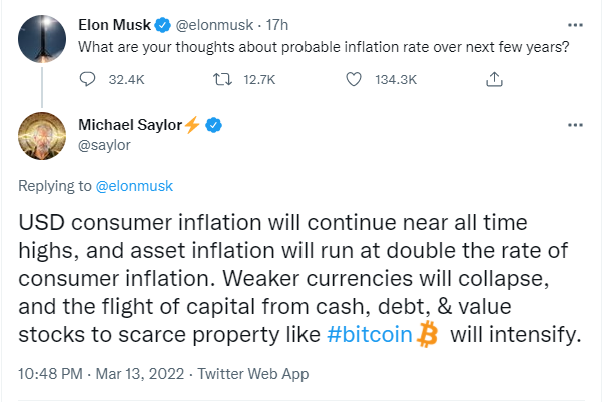 The thread was quite interesting, however. Musk’s question originally centred on inflation, and what the Twitter community thought the rate would land at over the next few years. With US inflation ticking along at all-time highs, the topic has been the subject of many a discussion, with fears that it is rapidly spiralling out of control.

The Fed is widely expected to rise rates this week, following the CPI reading of 7.9% for February, with food and energy costs rising prices by the most in 40 years. Combined with the fact that gas is at all-time highs, inflation really is the topic du jour, while the Fed are poised to hike for the first time in three years. 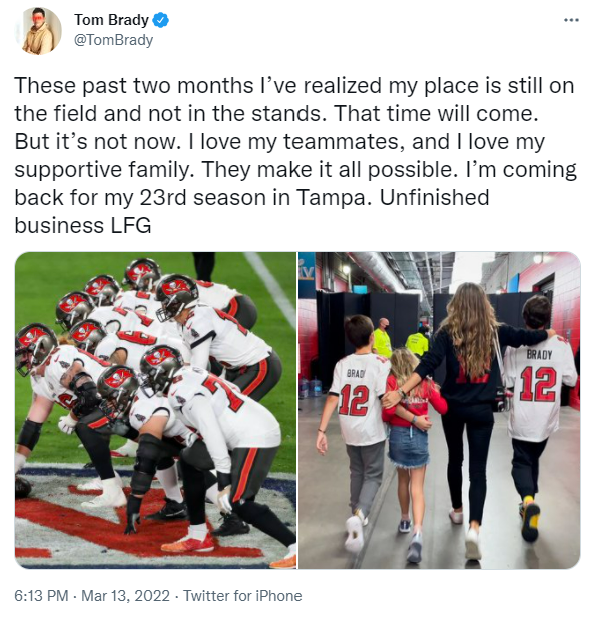 Maybe Tom Brady reversed his retirement decision after going to fill up his car with gas, deciding his $475 million in career earnings were not sufficient

Of course, Michael Saylor took this as his opportunity to pitch the most polarising inflation “hedge” of all – Bitcoin. Proponents often cite the mathematically coded scarcity – there will only ever be 21 million bitcoins and the mining rate follows a pre-defined schedule. With 19 million bitcoins already mined and the final bitcoin slated for 2140, the flight of capital to the scarce asset will intensify exponentially, or so the theory goes.

There is no doubt that the debt crisis, skyrocketing inflation and continued institutional adoption of Bitcoin does present a very intriguing case for “magic Internet money” to represent the inflation hedge that has traditionally been occupied by gold. The bull case goes that if gold has a market cap of $12.7 trillion, then assuming Bitcoin takes its places and establishes itself as the same value, extrapolating that $12.7 trillion market cap and dividing by 21 million bitcoins equates to over $600,000 per bitcoin.

Personally, I do believe Bitcoin is primed to establish itself as a store of value. However, I do often grate my teeth when Saylor implores people to mortgage their houses in order to buy more bitcoin, or to sell everything they have to pour it into the cryptocurrency. Sure, I love Bitcoin, and I’m on board with the macro-dominating vision. But there is also such thing as risk management, and there’s no getting around the fact that right now, the asset is still scary-volatile. The average citizen with a mortgage simply cannot sustain the 20% daily drawdowns that Bitcoin can throw up. Saylor is a billionaire and to me it seems like he has completely lost touch when he spews that evangelical Bitcoin rhetoric.

Musk then did what he does best, pumping Dogecoin 10% off the simple sentence “I still own & won’t sell my Bitcoin, Ethereum or Doge fwiw (for what it’s worth)”. A little more sensible and measured than his usual Twitter endorsements, and he painted a lovely juxtaposition with Saylor’s rabid fanaticism by seeking to educate “those looking for advice from this thread” about inflation.

No matter what you feel about Musk and Saylor personally, there’s no getting around the fact that the macro climate – ballooning inflation, manic gas prices, war in Europe – is raising all sorts of interesting questions about the role of Bitcoin in the modern monetary environment.