Crime with cryptocurrencies such as bitcoin (BTC) and Ethereum (ETH) reached a new record in 2021. A staggering $14 billion in illegal transactions were conducted via blockchain technology in the past year alone, a new report by research firm Chainalysis states.

This $14 billion is an increase of no less than 79% compared to the $7.8 billion in 2020, but this may paint the wrong picture. The figure is not only an all-time high, but also an all-time low.

The total transaction volume with crypto rose even faster in 2021. Last year alone, the total increased to a staggering $15.8 trillion, which is an increase of 567% compared to 2020. That means that only 0.15% of all transactions are connected to crime, a 75% reduction from 2020 and 96% from 2019. “Crime is becoming an increasingly smaller part of the cryptocurrency ecosystem,” Chainalysis said. 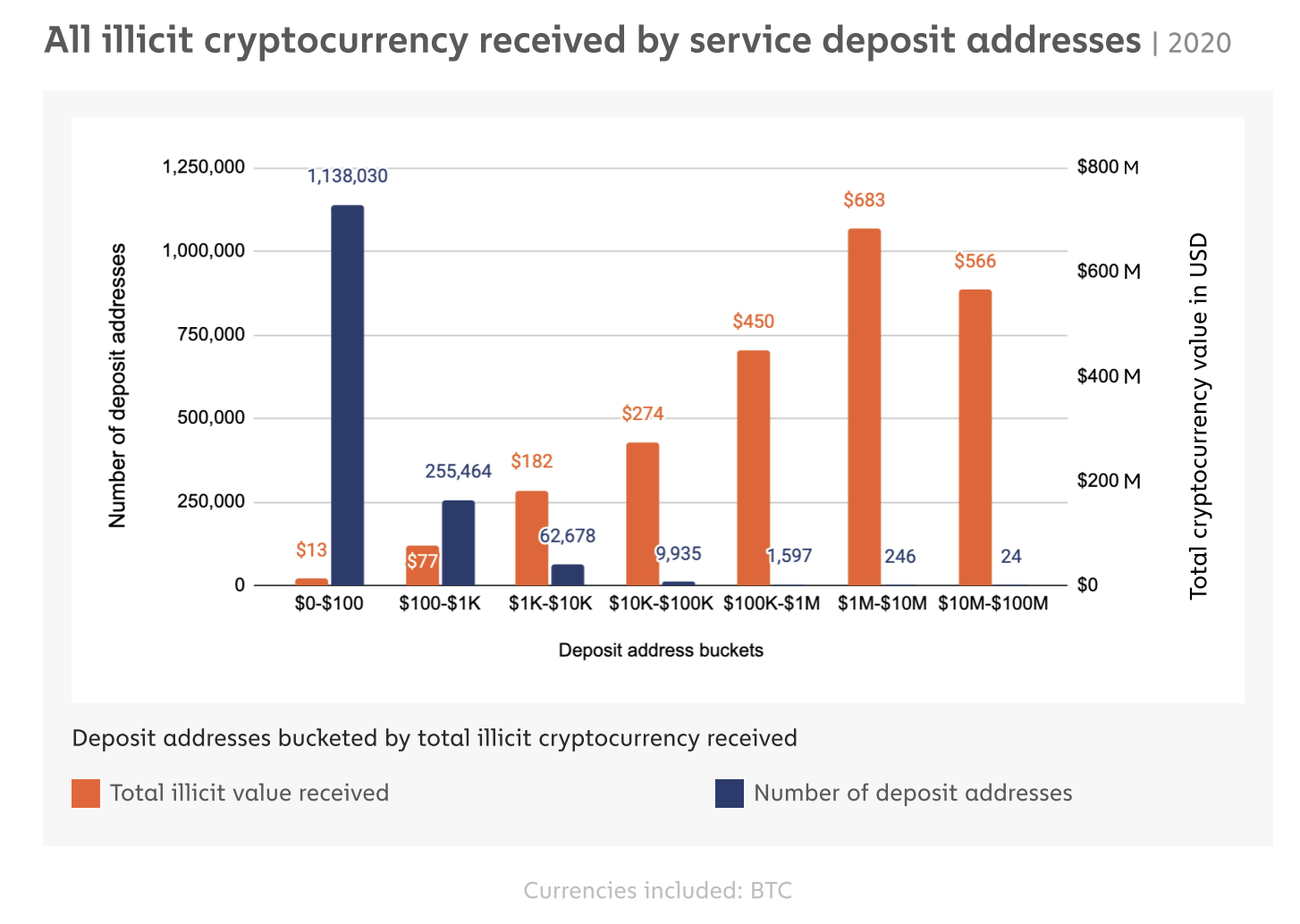 Graph from Chainanalysis report, 2022 According to the blockchain research firm Chainalysis, criminals have had their fair share in the past year. A study states that by 2021 at least $8.6 billion will have been laundered by criminals within the world of cryptocurrencies. This would represent an increase of at least 30% compared to the previous year.

Remarkable is the fact that there is a strong change in the platforms of choice of criminals. This has everything to do with the rise of decentralized finance (DeFi). More and more large, centralized exchanges such as Coinbase and Binance today have extensive know your customer (KYC) rules. This ensures that criminal activity on such platforms cannot easily go under the radar.

That is why criminals increasingly opt for DeFi platforms for their malicious practices. Such platforms generally have a lot less sophisticated KYC rules, or even don't have them at all.

For that reason, Chainalysis's research also shows that the use of DeFi platforms for money laundering has increased by almost 2000 percent in 2021 compared to the previous year. According to Kim Grauer of Chainalysis, it clearly shows that criminals are opting for DeFi on a large scale.

In total, 30% more money was laundered by criminals within the crypto sector in 2021 than the year before. This represents an increase from $6.6 billion to $8.6 billion.

Theft and scams are the most common crypto crimes

The two most common forms of crime in crypto in 2021 were theft and scams. The decentralized finance (DeFi) market played a major role in both, the study reports. In fact, DeFi exploded in 2021, driving a massive surge in both legitimate and illegitimate transactions over the past year.

DeFi projects were regularly the target of major theft in 2021, Chainalysis reports. This is because the technology is still new and open source. This makes it easier for hackers to find vulnerabilities in the underlying code. In 2021, approximately $3.2 billion worth of crypto was stolen. About 72% of all crypto theft was linked to DeFi protocols. 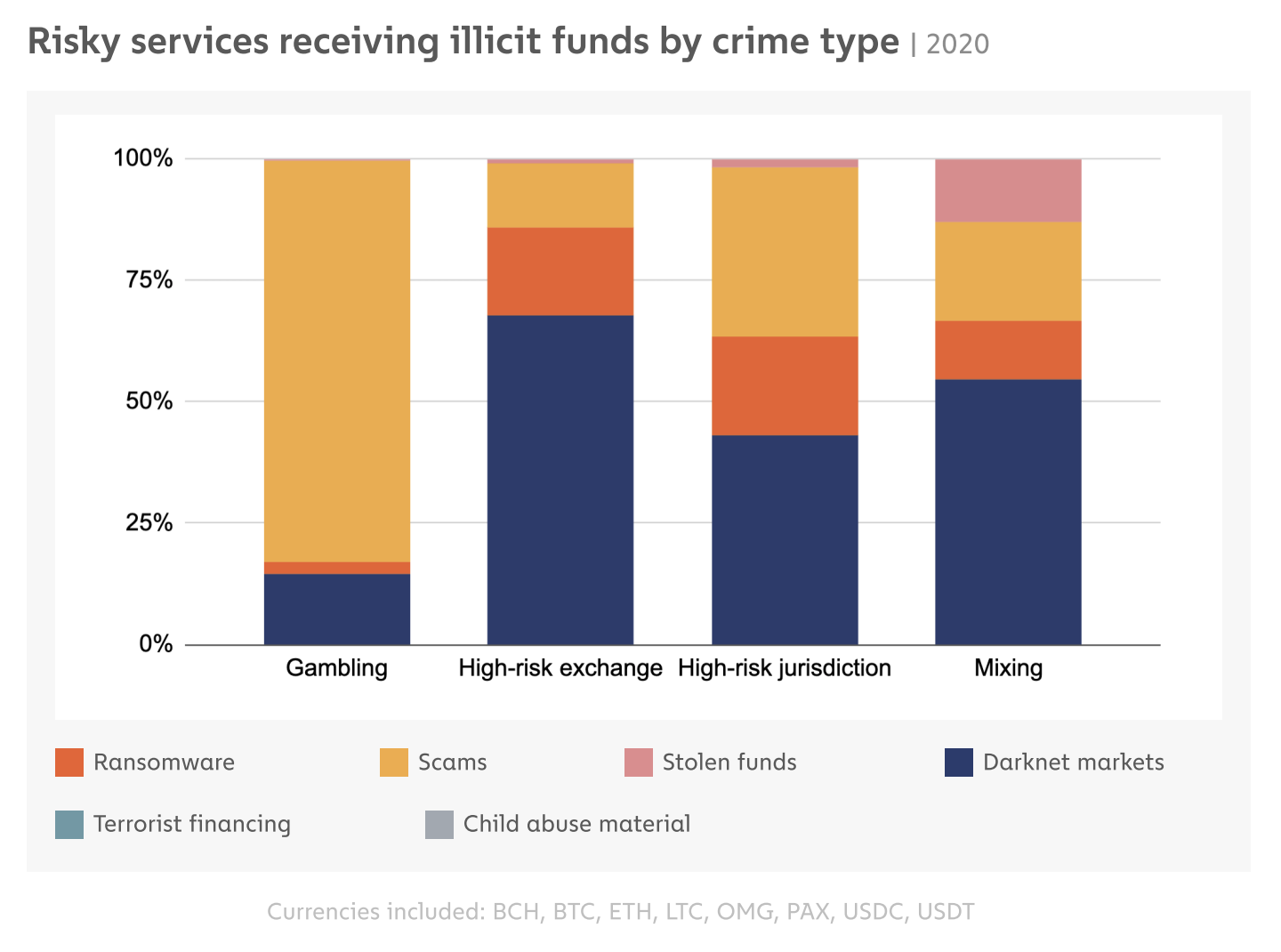 Scammers were responsible for the bulk of illicit crypto transactions. This form rose 82% to $7.8 billion. A large part of this were so-called back pulls, a relatively new trend. In this kind of scam, the developers suddenly disappear with the money of the investors.

Despite the very low crime rate in crypto overall, Chainalysis states it still worries about these increases:

“Criminal misuse of cryptocurrency creates huge barriers to further adoption, increases the likelihood of governments imposing restrictions, and worst of all, it victimizes innocent people around the world.”

It is often stated by regulators and governments that the possibility of money laundering within the crypto ecosystem is a reason to tackle the entire sector hard and to implement tough measures.

However, compared to the traditional world of fiat money, crypto doesn't even come close. According to the United Nations, between $800 billion and $2 trillion in money is laundered annually in a more traditional way.